Almost two years ago I wrote a blog post on demystifying ASP.NET MVC 5 error pages and error logging, which became one of my most popular posts on this blog. At that time of writing the issue was that there were an awful lot of choices on how to deal with unhandled exceptions in ASP.NET MVC 5 and no clear guidance or recommendation on how to do it the right way.

Fortunately with ASP.NET Core the choices have been drastically reduced and there is also a much better documentation on the topic itself. However, there's still a few interesting things to consider which I wanted to point out in this follow up blog post and clear up any remaining questions on ASP.NET Core error handling.

First I thought it's worth mentioning that the relationship between ASP.NET Core and ASP.NET Core MVC hasn't changed much since what it used to be in Classic ASP.NET.

ASP.NET Core remains the main underlying platform for building web applications in .NET Core while MVC is still an optional web framework which can be plugged into the ASP.NET Core pipeline. It's basically a NuGet library which sits on top of ASP.NET Core and offers a few additional features for the Model-View-Controller design pattern.

What that means in terms of error handling is that any exception handling capability offered by MVC will be limited to MVC. This will become much more apparent when we look at the ASP.NET Core architecture.

ASP.NET Core is completely modular and the request pipeline is mainly defined by the installed middleware in an application.

For better demonstration let's create a new boilerplate MVC application and check out the void Configure(..) method inside the Startup.cs class file:

Because that is a lot of boilerplate code for a simple web application I'll trim it down to the main points of interest:

What you can see here is fairly self explanatory, but there's a few key things to understand from this code. The app.Use...() (extension-) method calls are enabling several middleware by registering them with the IApplicationBuilder object. Each middleware will be made responsible for invoking the next middleware in the request pipeline, which is why the order of the app.Use...() method calls matter.

For example this is a rough skeleton of the StaticFileMiddleware:

I cut out some noise to highlight the usage of the RequestDelegate variable.

The RequestDelegate is, as its name suggest, a delegate which represents the next middleware in the lifecycle. ASP.NET Core defers the responsibility of invoking it to the current middleware itself. For example if the StaticFileMiddleware is not able find a static file which matches the incoming HTTP request then it will invoke the next middleware by calling return _next(context); at the end. On the other hand if it was able to find the requested static file then it will return it to the client and never invoke the next or any subsequent middleware anymore.

This is why the order of the app.Use...() method calls matter. When you think about it the underlying pattern can be seen a little bit like an onion: 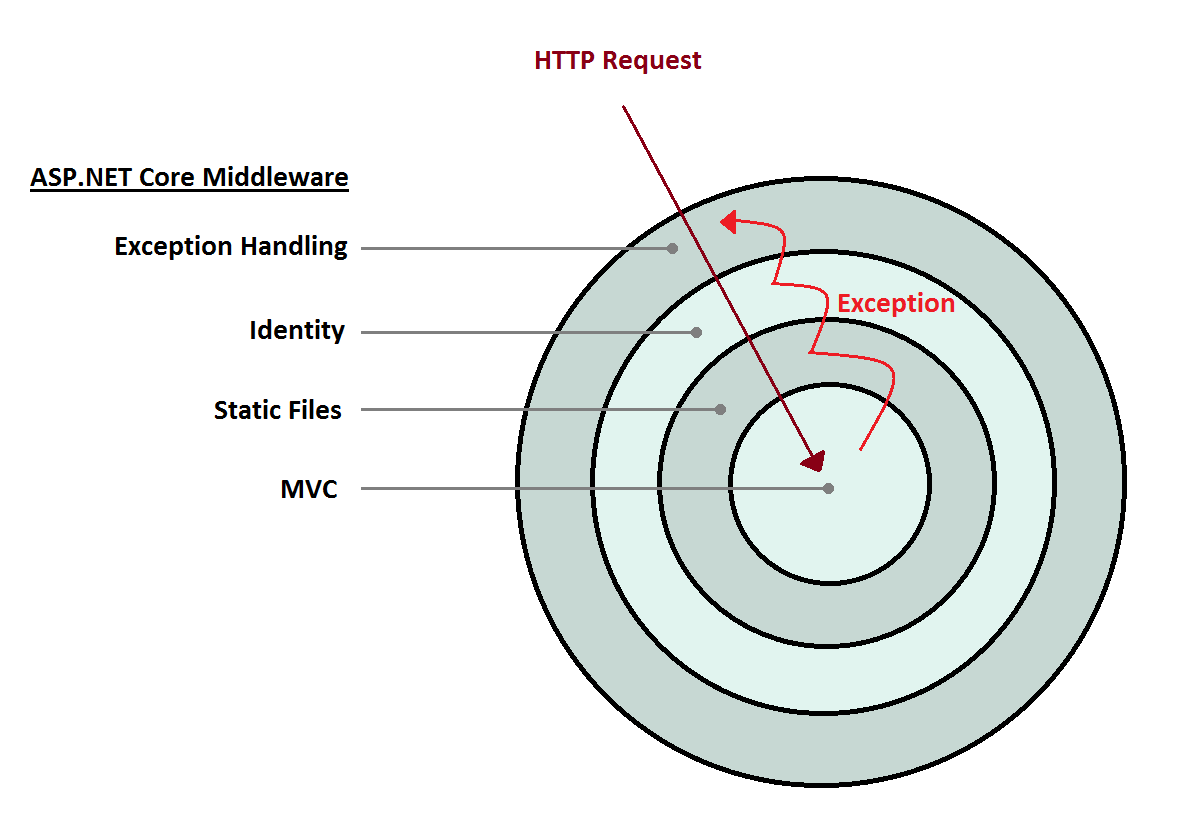 A HTTP request will travel from the top level middleware down to the last middleware, unless a middleware in between can satisfy the request and return a HTTP response earlier to the client. In contrast an unhandled exception would travel from the bottom up. Beginning at the middleware where it got thrown it would bubble up all the way to the top most middleware waiting for something to catch it.

In theory a middleware could also attempt to make changes to the response after it has invoked the next middleware, but this is normally not the case and I would advise against it, because it could result in an exception if the other middleware already wrote to the response.

Error handling should be the first middleware

With that in mind it is clear that in order to catch any unhandled exception an error handling middleware should be the first in the pipeline. Only then it can guarantee a final catch if nothing else caught the exception before.

Because MVC is typically registered towards the end of the middleware pipeline it is also clear that exception handling features (like the infamous ExceptionFilters) within MVC will not be able to catch every exception.

For more information on middleware please check out the official documentation.

Now that middleware and exception handling hopefully makes sense I also wanted to quickly show how to create your own global exception handler in ASP.NET Core.

Even though there is already quite a few useful exception handlers in the Microsoft.AspNetCore.Diagnostics NuGet package available, it still might make sense to create your own one as well. For example one might want to have an exception handler which logs critical exceptions to Sentry by using Sentry's Raven Client for .NET or one might want to implement an integration with a bug tracking tool and log a new ticket for every NullReferenceException that gets thrown. Another option would be an integration with elmah.io.

A good example of writing your own exception handling middleware is the default ExceptionHandlerMiddleware in ASP.NET Core.

A default exception handler boilerplate would look like this:

In addition to the RequestDelegate the constructor also accepts an ILoggerFactory which can be used to instantiate a new ILogger object.

In the Task Invoke(HttpContext context) method the error handler basically does nothing other than immediately calling the next middleware. Only if an exception is thrown it will come into action by capturing it in the catch block. What you put into the catch block is up to you, but it would be good practice to wrap any non trivial code in a second try-catch block and default back to basic logging if everything else is falling apart.

I hope all of this made sense and that this blog post was useful again. Personally I find it extremely nice to see how well ASP.NET Core has evolved from its predecessor. If you have any more questions just drop me a comment below.