OK so I have to admit that I can have a pretty big mouth sometimes, which is certainly not a good quality to have. I don't shy away to be (overly) critical if things annoy me: 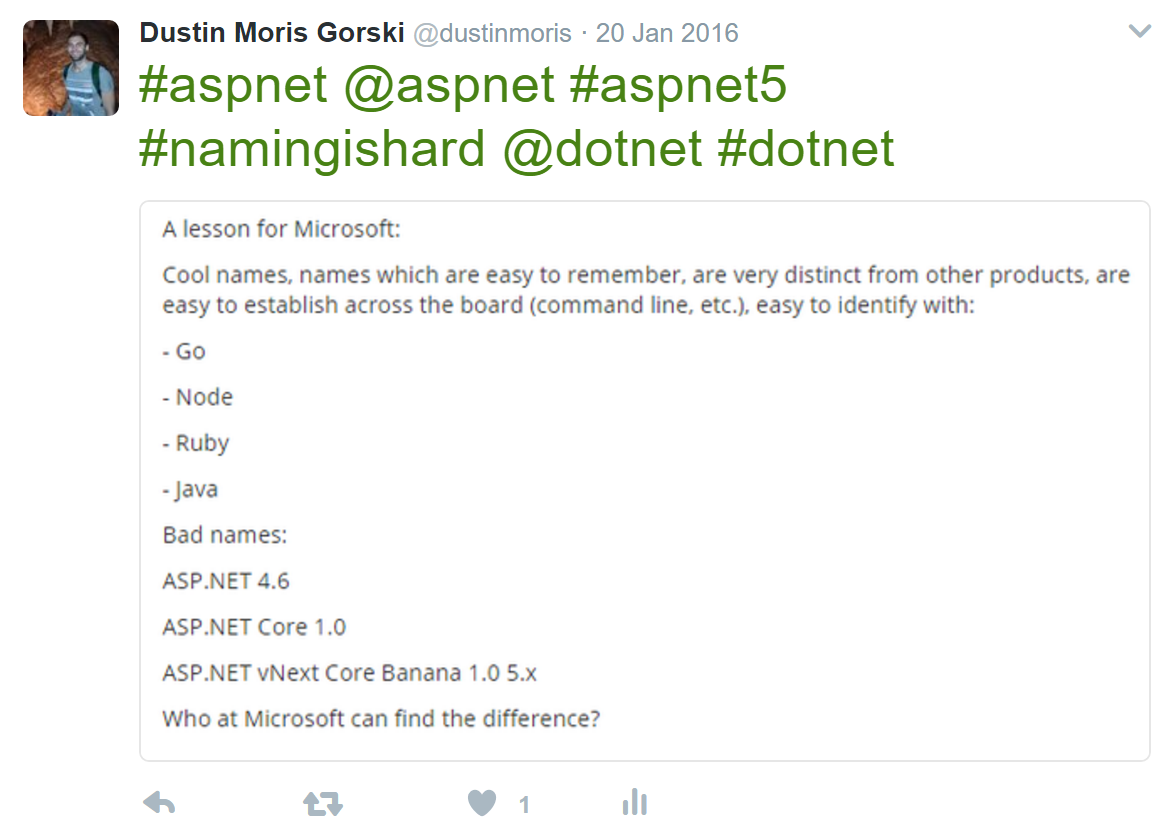 As you can see, about a year ago I was a little bit upset that a great new product received a not so great new name. I really hoped that ASP.NET Core would have been named something much "cooler" for my taste.

So my frustration continued...

(Let's be honest, it is probably a good thing that I don't have many Twitter followers.)

And even a year later I feel like I am still suffering sometimes:

But I don't care about the name anymore.

Because the product is actually really good.

Yes, the name is still an issue when you google for stuff, and yes, the tooling is still in preview, and yes, the support for F# is not even in RC yet, and yes, there's still lots of other little annoyances which would be nice to have fixed soon, but when I look past all that for a moment then I have to admit that the product is actually really freaking nice.

Being harsh is easy

Often it is very easy to be very quickly critical, but much harder to acknowledge someone's good work. It's already an effort to think about praising people who did a great job at work, let alone praising some third party who you are not even directly related to.

But I think as someone who depends a lot on these third parties, corporations like Microsoft, who own a lot of the tech which I love and use every day, and other contributors from the open source community, then it's important to give back to these people as well.

Particularly with companies like Microsoft many people feel entitled to be overly rude or critical if things don't work out immediately the way they want it to be (and not just Microsoft but really any company of similar size). It is so easy to forget good manners when one is thinking of a big company logo rather than actual human beings, because it is much easier to throw dirt at a logo than a person. 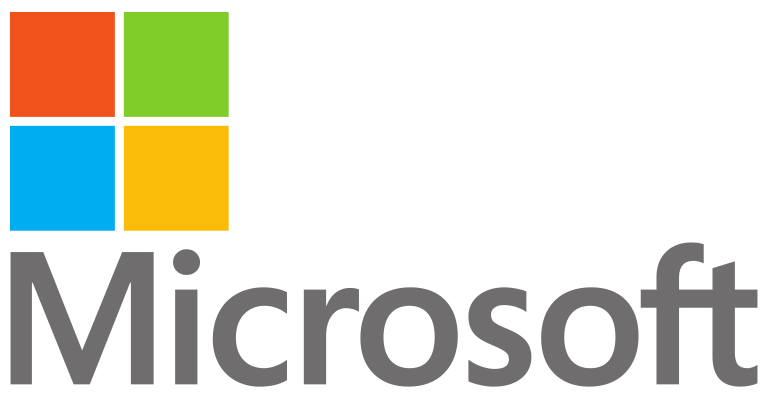 But behind these logos there is still human beings working hard on the products which we use every day and they are not any different from us. Women and men who got into software development and IT for the same good reasons as we did, who share the same passion as we do and who make the same mistakes as us, even when they have only the best in their intention.

Microsoft has made a lot of mistakes in the past (Vista, Windows 8, Silverlight, Windows Phone, Skype, you name it!) and we've not come short to let them know how much these products sucked, but in most recent years they've actually done an amazing turnaround and even taken the lead in some of the most exciting innovations of our field and I am certainly not the only one who has noticed it.

Here's a list of a some of the many awesome things that happened at Microsoft in recent years (in no particular order):

This is a lot of (radical) positive change in a comparatively short amount of time when you think about the size of the company!

You have to admit that this is awesome. I mean I am not even a designer and I get a watery mouth by looking at it.

To be honest the whole Microsoft Surface product series is awesome and I speak from personal experience. Last Black Friday I bought my partner a new Surface Pro 4 (I accidentally spilled a drink over her old laptop) and boy was I impressed with her new device. It's slick, it's fast and when I tried out the drawing with the pencil then my jaw dropped and I was left with pure jealousy (and I say that even though I have a Lenovo Yoga 900 which is a pretty neat device itself).

But that is not even why I am so pleased with Microsoft in recent days. As a .NET developer I am mostly impressed by the work the teams have put into .NET Core, ASP.NET Core, C#, F# and the tooling around it.

Especially the ASP.NET Core team led by Scott Hanselman and Damian Edwards is an excellent example of how well Microsoft functions today. Don't get me wrong, I know that ASP.NET Core is still far away from being perfect and that there's still loads of stuff that needs to be done before everyone can use it, but I am still amazed by how far this team has come today.

They have taken a 10+ year old technology, completely revamped it and transitioned from an entirely closed and proprietary product team to one of the most approachable open source contributors that I have ever seen. Not only is their code on GitHub, but they are putting an immense amount of time and effort into keeping a close relationship to the .NET community. They are active on GitHub, Slack, Gitter, Twitter and heck they even live stream a weekly standup where they demo the latest stuff hot from the press, answer live questions to the community, give updates on the current development status and talk about the roadmap. They even spend time going through blog posts written by non-Microsofties where Jon Galloway presents a whole list of community written content at the beginning of each standup. This has become a nice ritual where the Microsoft team gives back to other open source contributors and help nourish a friendly and healthy community.

I find this is amazing work. I don't know many other teams in the world who put this much effort into their open source work.

This is not Microsoft trying to put some code on GitHub and then turning on the #OpenSource marketing machinery. No, this is Microsoft showing the rest of the world how open source is done right (and I am not trying to undermine the open source work by others here, just trying to highlight how well it's done at MSFT).

Also I'd like to point out that this team is doing the difficult balancing act of developing a completely new technology which is supposed to entertain an already existing (and very spoiled) community as well as trying to attract new programmers from the open source field. I guess this is much harder than just launching a new product into the market like Go, Rust or Node.js which didn't have an existing developer base to please.

I have been a C# developer for almost the entirety of my professional career and only in the last year I really fell in love with functional programming and F#. For me F# is probably one of the most powerful languages on the market right now. It has the horse power of .NET under the hood with the beauty of a modern functional language on the surface and it has been open source, cross platform compatible and community driven from the very beginning of its time.

So with all of that I've got something to say which was overdue for a while now:

Thank you Microsoft for being awesome!

Seriously, a special thanks to all of the Microsoft teams who work on .NET Core, ASP.NET Core, Visual Studio, Visual Studio Code, C#, F# and the entire goodness around it!!! Your products are awesome and because of your great work I enjoy working in the .NET eco-system more than ever before!

This is not me being sarcastic, I am dead serious, so thank you guys!

I hope when you read this then you know that despite all the negativity that Microsoft has to suck up every now and then that there's also a lot of developers who think you are doing an amazing job and that without you we would be probably some poor suckers who would have to work with Node.js or some other soul destroying technology!

Join me in saying thank you

If you are a .NET developer who loves working with C# or F#, who thinks that Visual Studio (Code) is one of the best IDEs, who thinks that ASP.NET Core and .NET Core are awesome new development stacks then please join me in saying thank you to these guys so that they know that all of their hard work is paying off.

Oh and before someone labels me a Microsoft fanboy or thinks that there's a hidden agenda behind this blog post then let me tell you this:

Sometimes is just feels damn good to be nice.

...something which I would wish programmers would do much more to each other, particularly in such divisive times like today.