Font Awesome is truly an awesome library. It is widely used across many websites and has made a web developer's life so much easier!

There is one thing which I don't find that awesome though. It pollutes your HTML with a lot of styling markup.

Let me explain the problem with an example...

The default way to include an icon into your website is by adding an <i> tag into your HTML code; like this:

For example, the car icon will render into:

This is great, but now you end up with many empty <i> tags in your HTML code, which have no structural purpose in the document whatsoever. Even worse, these tags are tightly coupled to a concrete theming technology, Font Awesome in this case.

This is not great and I personally think HTML markup should be theme agnostic.

Solutions out in the wild

A quick Google search brought up some solutions to the problem. None of them without any drawback though.

By providing your own copy of Font Awesome you'd obviously be able to do what you like and easily solve the problem, however this appraoch has some major issues:

#2 Add the classes to the target element

The next best suggestion was to attach the classes to the target tag instead of the <i> tag.
For example:

As you can see this works, but Font Awesome has become the font for the entire anchor tag now. The browser ends up rendering the text in the default font, which mostly comes from the serif family and is rarely what you want.

#3 Setting the unicode character in your custom CSS

The most popular solution was to set the Unicode character for the content property of the ::before attribute:

The result will be visually perfect, but there are a few things which I don't like about this appraoch:

After I wasn't really satisfied with any of the proposed solutions I tried to find a better one.

Let's break it down

The icon isn't what we want, but at least the tag's original font remains as is. Using the Google Chrome developer tools I can quickly confirm that the icon-specific class is not doing any harm to the original tag: 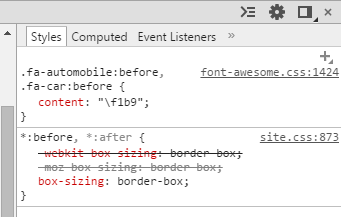 Evidently this class only adds the content to the ::before attribute of the target element. The conclusion is that the actual styling gets applied via the "fa" class: 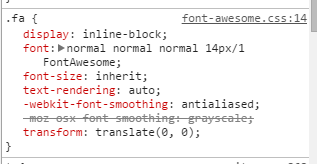 Now this makes sense. The content from the ::before attribute gets rendered inside the original tag and therefore also picks up the styling from the fa class.

Everything from the fa class could equally go into the icon class as part of the ::before attribute, but I can see why the Font Awesome team has extracted it into a shared class, because it is the same for every icon and would be otherwise a maintenance nightmare.

After inspecting the code I realised that all I need is to create one additional class in a custom style sheet to fix the problem:

It is a copy-paste of the original fa class with 3 changes to it:

With this little trick it seems like I am able to tick all the boxes:

Especially the fact that I don't have to use the unicode characters is very appealing. When I read the code "icon fa-car" it is pretty obvious what the rendered result will look like.

At the moment I haven't found a drawback with this appraoch, but there might be something which I have overlooked. If you know of any issues or if you know an even better appraoch, then please let me know! Feedback is much appreciated!